It’s the time of year to look back on what 2018 has delivered and to plan ahead to what should be done in 2019. This isn’t something I normally do, but last year was quite a year so here goes.

In 2017 I took courage in my convictions that I wanted to return to life in the north. In a familiar pattern,  I had moved south to work many moons ago; I stayed there far longer than I ever anticipated. I changed jobs, changed career, ran, biked, swam, loved, lost and came out the other side. All the while, in the back of my mind was a smouldering ember, a desire to return to my roots; not back to where it all began but forward to a new location back in the north. It was time to stoke the fire.

So it was that on Jan 2, 2018 I set off for Ingleton with a vague idea that there might be a room available in the iCentre (I’d seen one in August 2017 but couldn’t commit to at that point), with a van load of kit (just in case it came to fruition – positive thinking must be the way forward) and a couple of facebook contacts. There followed bike rides, cake, coffee and talking about bikes, staircases (carrying the so-called portable couch) and some of the most wonderful people you could hope to meet.

By the end of that first week, I had treated my first patients and watched one of them head off onto the Spine race. This told me I was working with my kind of people; slightly bonkers and with a thirst for action. By the end of January I had my clinic room, a base to work from at long last. My love affair with the M6 was developing as only travelling that particular thoroughfare can; love/hate to say the least. (I love my toll tag though. Sailing through the toll booths, past all those that screamed up and passed me on the approach. Small things give great happiness.)

The pattern continued all year – up here one week, down there the next. I’m still yo-yo-ing up and down the country, cheering each time I cross the Thelwall viaduct coming north, trying not to think about it too much as I join the roadworks just after the Thelwall viaduct going south. I am loving riding and running up here – making the most of not driving between appoitnments as is necessary in the south.

Chris Shipley ran the enire coast of Britain in just under 6 months. A new rucsac was delivered in Carlisle. http://www.chriscoastrun.co.uk

I’ve massaged many crazy souls that found themselves passing through the Yorkshire Dales, either riding John O’Groats to Land’s End or circumnavigating the county of Yorkshire. I’ve delivered emergency gear upgrades to someone running the entire coast of Britain. I’ve surprised orienteering friends by turning up at the right place at the right time and then rescuing kit left behind because the cafe fare was just so good. 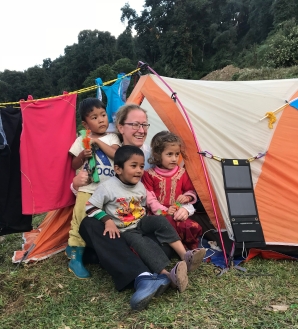 Meeting the locals on the trail

I took a gamble when I applied to join the Yorkshire Ramblers Club trek to Nepal in October. A month away when trying to establish a new business may have been foolhardy but that opportunity wasn’t likely to come round again any time soon; when you see a chance, you have to take it. Hence I was away in the far east of that beautiful country on the trails to the two base camps for Kanchenjunga, following in the footsteps of my father nearly 30 years earlier. Little did I realise before I left just how beneficial the experieince was to me in ways I could not have anticipated. Nepal and the Nepali people do that to you, by all accounts.

At the turn of the year, the cycle has started again. I’m up in Ingleton for the first working week of the year. I will be back down south at the weekend. Who knows what the future brings but I’m sure it will be increasingly Yorkshire focussed.

Here’s to a healthy, happy and successful 2019!